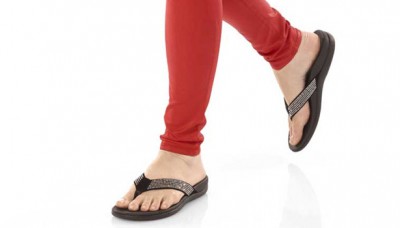 Temples are the place that contains pure vibrations of magnetic and electric fields with positive energy. In olden days, temples were built in such a way that the floor at the center of the temple were good conductors of these positive vibrations allowing them to pass through our feet to the body. Hence it is necessary to walk bare footed while you enter the core center of the temple. In almost all the holy places of worship, it is believed that the cosmic energy from the cosmos is swirling around, by virtue of the place being a meeting point of energies, or by virtue of continued practice of prayer/meditation/ rituals/etc at that point in the temple or place of worship. This is the reason why we feel a sort of peace and quiet when we enter some temple, since that place is saturated with the vibrations of so many prayers/mantras/divine thoughts, which draw the cosmic energy into that place. The person, who enters the holy place, becomes a conductor of that cosmic energy. It is believed that when that cosmic energy enters the person, it can cause drastic changes in the person’s physical and astral body if the person does not pass out the energy to the ground. Even though the cosmic energy is positive and beneficial, it is believed that not all human bodies are equipped to handle that kind of energy. (Some panic healers even avoid healing babies because of this reason).

Another known reason is shoes and chappals are used everywhere hence they tend to get all the impurities like dirt, germs etc which spoil the pure environment of the temple and is the source of negative energy.

Even Bible Says as follows. "When God called to Moses from the burning bush, the first thing God told him was, "Take your sandals off" (Exodus:3:5)." This is because, the energy coming direct from God (as in the case of Moses and the burning bush) could have burnt or damaged the physical body of Moses – And by removing the sandals, the cosmic energy is earthed to the ground. In the case of Moses, the change in his appearance was visible, as is evidenced by his wife’s reaction when she sees Moses return from the mountain (not all versions of the Bible say this). Just as electricity and Magnetism, Cosmic energy too, is invisible. But we have instruments to measure electricity and Magnetism. And Mankind is yet to develop simple measuring kits/instruments for measuring cosmic energy. Experiments have been conducted by various organizations to study the holy water used in the Kalasam kept during Homams and Yagams – and changes in the water molecules have been noticed, some of which have even been published.

However, simply because the cosmic energy cannot be measured as yet, skeptics have been dismissing the theory that energy may be there in the ether. However, those interested in utilizing or using this energy need not necessarily start studying these invisible currents as it may take hundreds of years before instruments to measure or detect such rays are invented. Humanity did not know about X-Rays before they were discovered. Humanity did not know about electrical energy before it was discovered. But our ancient rishis and saints and siddhars have studied and mastered this energy. Sri Ramakrishna tells an interesting story of the mango grove where a person who is interested in eating mangoes, simply plucks the mangoes and eats, instead of the studious person who starts counting the leaves, the mangoes and branches of the trees and studying them. Similarly, the person who wishes to make use of these currents should go ahead and utilize them instead of trying to reason out the existence of such currents scientifically as it will take many years to physically prove their existence.

Is this not the reason why electric installations have “earthing”, where the wire that is earthed is taken straight to the ground? Just as a building is fitted with a lightning rod, which is connected to the ground to “earth” the electricity flowing out of lightning, the human body needs to earth the cosmic currents, which is why, many schools of thought suggest walking barefoot on dewed grass or ground early in the morning to “reconnect” with the earth energy. This is said to not only activate the earth chakra in the human body, but also to release the negative energy from our body to the ground. There is also the added benefit of activating the acupressure points on the soles…..

And this is the main reason why in places of worship, one is required to take off their sandals or shoes. When the cosmic energy passes through the person, the person is cleansed of any diseased or negative energy by the positive cosmic energy. But I must add here that the same anology of positive energy also applies in the case of negative energy. Which is why, one should always WEAR FOOTWEAR in a place of possible negative energy, like a crematorium, graveyard, etc. One can safely assume that it is because of this very reason that the ancient sages and rishis and saints used wooden sandals – so that they retained some specific energy and also to ensure that the positive energy that they received was NOT transmitted to the ground! Apart from ancient Indian tradition, Chinese and Japanese traditions also have widespread use of wooden sandals. Wood (Largely cellulose fibers) consists of Carbon, Hydrogen and Oxygen atoms – and why wood is an excellent footwear has to do more with the molecular structure of wood – The advantages of wooden sandals over leather sandals may take another full blog, so I will stop here. From dust to dust….The human body, has to go back to the five elements…..but the earth energy, plays an important part in us, when we are alive….and the one part of our body that is in constant touch with the earth, are our soles……

Why to Remove Your Footwear?

home remedies for cold and sneezing

To prevent cholera in Tamil

Heal the argument in Tamil